The Church of St Mary the Virgin Ramsden Bellhouse

The earliest written reference to the church occurs in 1281, the lands of the village were recorded as being
owned by the Bishop of London in 1066, and this would tend to support the case for the existence of a church here at that time. 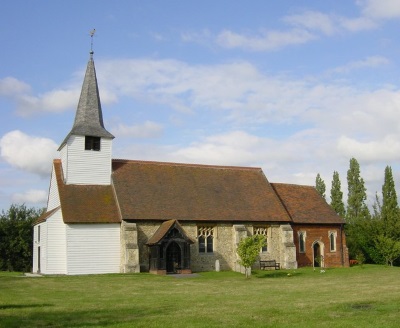 The present church building is the result of many restorations and alterations over the years but fortunately the result has been one of simple charm, in sympathy with its primary purpose. &nbspThe oldest parts of the present structure are timber.   The tower is a fine example of an Essex timber belfry, it has been dated as late as medieval, about 15th Century, and most of the original structural timbers still exist, as does the carved West Door.  These towers are unique to the southern part of Essex.

The Belfry was originally open to the church with a gallery over where the organ now stands. The separating west wall was added in the late 18th Century.   The Belfry houses three bells which replaced pre-reformation bells and were cast by William Land in 1615, William Lambert in 1638 and Richard Phelps in 1711, the latter being recast in 1929.

The Nave roof structure is a good example of a King Post construction, with the main timbers being 15th Century.   The north wall of the Nave was rebuilt and reduced in thickness to its present 3'6" and two new windows inserted in 1879.   The excess stone from the wall was used to re-face the southern wall which had earlier been rebuilt in brick, thus making a more pleasing appearance.   During the rebuilding of the north wall, a stoup, or piscina was discovered adjacent to where a previously blocked up north door had been.
The stoup is thought to be from Edward III time, was placed in the new north wall in approximately its earlier position (Fig. 1).   The Nave was re-floored and re-benched at the same time.

The Chancel was rebuilt in 1812 after having fallen down for the third time, probably due to undermining of the foundations by the repeated practice of burials inside the church.  The Chancel was rebuilt on new foundations outside the original but in the same alignment and retaining the previous roof structure.  This has resulted in the Chancel being wider than the Nave on the inside, but due to the much thicker walls of the Nave, maintains a traditional appearance outside.  The apparent misalignment of the Nave to the Chancel is not an unusual feature in the layout of medieval churches.  The inclination of the Chancel to the left of the Nave represents the inclination of the head of Christ on the cross which is traditionally depicted to the left whilst the Nave is taken to represent the body of Christ.  This configuration is known as a weeping aisle (Fig. 2).   The roof beams of the Chancel are of a similar period to the Nave with the exception of the eastern one which was added when the Chancel was rebuilt in 1812.   Prior to this, the Chancel had a flat ceiling with only the central beam exposed and which is carved on the underside for decoration.

The East Window is a Mary window, in honour of the church's dedication and depicts the Annunciation, Nativity and Presentation.   This window was given by the late Reverend E. P. Gibson in 1892 in memory of his father-in-law, and patron of the church, the late Hattill Foll, J.P.

The Font is of traditional octagonal design, and has a 19th Century bowl on a much earlier stem and base which are the inverted originals.   The font cover is a modern replacement (1975) and has ironwork in the shape of a lotus flower on its top.

The Chest is a very interesting old iron-bound, stone-lined one.  The lid is in two parts for ease of handling and had four locks (Fig. 3).   It is dated about 1685 and was used to hold the church records.  These records are now held in the Essex Records Office in Chelmsford.

The Churchyard was extended to the rear in 1913 and again in 1950.  The original boundary can be seen by the change in ground levels.   The custom for churchyards to be re-used for burials over and over again is responsible for the gradual rise in ground levels.  It is estimated that probably in excess of 5,000 burials have taken place here over the centuries.

This article was first published in "Thoughts on Ramsden - A Brief History of Village Life" Compiled and Edited by Isabel Johnson
©Ramsden Bellhouse Village Hall Management Committee 2015
Registered Charity no.1025468