On the 23rd February 2015 an Official Opening ceremony took place with Councillor Terri Sargent,
councillor responsible for the environment and community advising that "it is fantastic to see residents 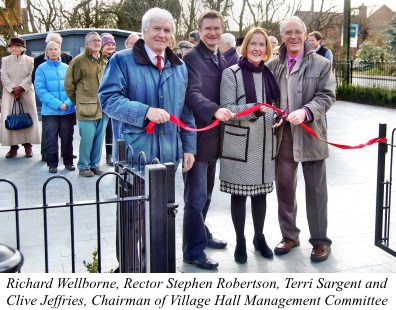 getting together to take on a project for the local community, especially one dedicated to honouring the memory of our fallen soldiers and civilians from the First and Second World Wars".

Richard Wellborne, Chairman of Ramsden Bellhouse Parish Council, added "for the first time in 70 years the village once again has a visible focal point where the relatives and members of the community, young and old, can reflect on the sacrifices made".

If you have not already done so, please remember to register on line at www.ramsdenbellhouse.info in order that you
can be kept informed of Village Hall events throughout the year.

In the Summer issue of the village magazine we informed you that thanks to a successful grant application and contributions from Basildon Council, Ramsden Bellhouse Parish Council and the Village Hall Management Committee, sufficient funds were available to progress with the new memorial and remembrance garden without having to rely on contributions from the community and local businesses.

Those of you who attended the RBPC stand at the Village Fete in the summer will have seen, and had the opportunity to contribute and comment on, the alternative design and copy concepts put forward. We are grateful to the residents who took the time to share their thoughts and suggestions with us. 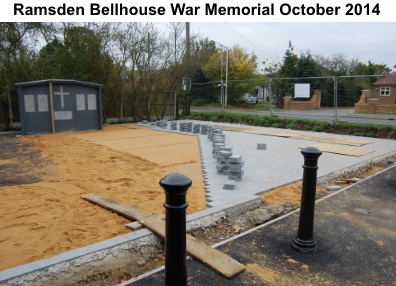 With regard to the current status, those of you who have visited the Village Hall recently will have noticed that the existing memorial has now been removed, together with the broken concrete surface and part of the hedge, which has enabled access to the site whilst the ground work is being completed.

Over the last couple of months you will have also noted that the foundation strip for the memorial has been put in place and new posts have been installed in the car park in order to protect both the fencing and gates around the site. Once the paving has been completed, a new hedge will be put in place alongside the fencing and further hedging will be placed in front of the fences to the side and back of the memorial in order to enclose the site.

The names of military and civilian casualties from the village from both the First and Second World Wars are being confirmed prior to their names being engraved onto the tablets that will form part of the memorial. Spare tablets are also being included as part of the design in order to provide space should they be required for the names of the fallen in future conflicts.

With only a few days to go before the Remembrance Day Service on the 9th November you will note that over the last few days the memorial has been completed and most of the ground work to the remembrance garden is nearing completion.

Whilst the original Plan was to seek and raise funds to replace the existing memorial and renovate the garden over a five year period, thanks to the generosity of the above mentioned organisations and the excellent work by the two companies involved, we are pleased to confirm that the project will have been completed in just over 12 months.

The service this year will be particularly memorable to those of you who had family members that fought in the 1914 -18 war. As many of you will have noted from the publicity on TV and in the Press, services are being held in every town and village in the country to commemorate 100 years since the start of the First World War.

Whether you are new to the village or have lived in Ramsden Bellhouse for many years, all members of the community and their families are very welcome to attend this special 100 year Commemorative Service which, as usual, will be followed by refreshments and will give you a chance to meet other members of the village. For those of you who have not already purchased a poppy, Kish has plenty available at the village shop.

If you have not already done so, please remember to register on line at www.ramsdenbellhouse.info in order that you can be kept informed of Village Hall Events throughout the year.