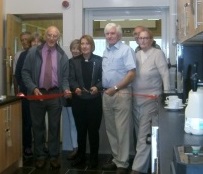 The Village Hall kitchen upgrade was carried out in the summer of
2015 and was officially opened on 1st September 2015 by
Councillor Terri Sargent.

An audience with Jim Buttress 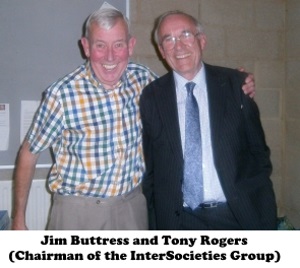 His talk was centred around his life in horticulture and included anecdotes about various situations and people he has encountered in his career.

He is a most interesting and entertaining speaker and a great evening was had by all.

Following the talk, everyone enjoyed a wonderful buffet while catching up with old friends. 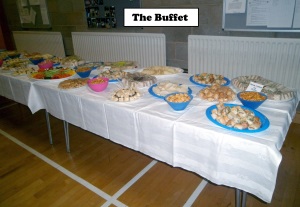 Praise must go to all the local horticultural groups who put on the evening, coordinated by Tony Rogers, Chairman of the Horticultural InterSocieties Group.

Because of the time of the year, the vegetable section of the show was brimming over with entries.
The floral art section had some lovely displays and the homecraft (cookery) classes with the cakes and jams, discovered some new talents from our male and female members.

To read a full account of the event as well as view all the photos, click here. 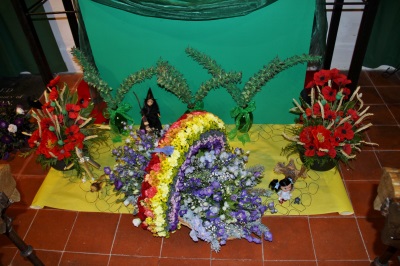 This year's theme was 'Colo urs' and the display of wonderful flower arrangements in the Church was magnificent.

Grateful thanks to the many people who assisted in running the event, including erecting the tents, manning the stalls and providing and serving the refreshments and, of course, to the visitors who came along and made it all worthwhile. The total amount raised was £2,873. 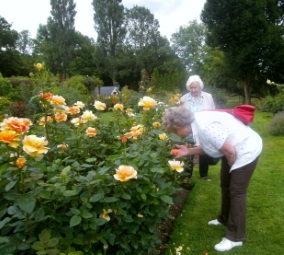 The Village Hall in Ramsden Bellhouse will receive its first facelift in 25 years thanks to a £14,500 grant.   It is hoped the work be completed by the end of August.

The Management Committee apologise for any inconvenience caused to our Village Hall sections and hirers.   We will keep you updated on the progress. 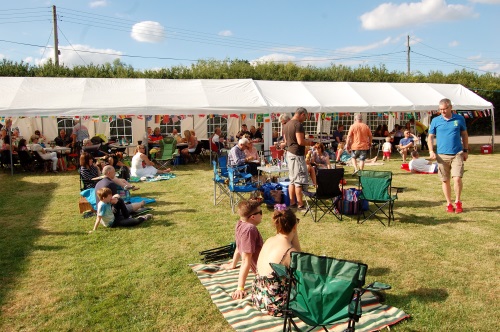 A big thank you to all those people who came along to support and help us celebrate our first
Ramsden Bellhouse Music Festival:  Party on the Green   held in the Village Hall grounds.

D’ukes, a very popular ukulele band, opened the Festival at 4pm as people came in and took their preferred spots under the marquees or on their own seats or blankets on the grass.

The singer Hollie Barrie, our local celebrity from
‘The Voice', was on next, followed by
David Van Day and Sue Moxley aka 'Rich and Famous'.

The hog roast included in the ticket seemed to be very popular and this was on offer right through to the end of the evening.  Anyone running out of drink could pop over the road to the local shop, Hemmings Stores Too, and replenish their stocks, or have a cup of tea or coffee as Kish and Jay kindly stayed open
until 11 o’clock. : Daren was on hand with the Village fish & chip van to provide a selection of hot food.

The last act to perform was Andre Dennison & Austin Drage aka Mijini
who had the crowds on their feet dancing until midnight.

The DJ linked all the acts together with great music as well as a laser show
when it got dark.

The day ended at midnight; a resounding success enjoyed by one and all.

After costs, £1,400 was raised, and goes towards the upkeep of Ramsden Bellhouse Village Hall,
which is a registered charity.

If you are interested in coming next year please send an e-mail to annwellborne@btopenworld.com
and I will get in touch when we have agreed on a date.

The Strawberry Cream Tea held at the Village Hall on Saturday 20th June was an outstanding success, raising a massive £700 for St. Mary's Church funds, which was some £170 more than our first
Strawberry Tea last year.   Ninety teas were served, and it was a very happy social afternoon, giving
rise to a number of favourable comments.

The Summer Show was quite successful from the point of view relating to the roses and garden flowers exhibited. 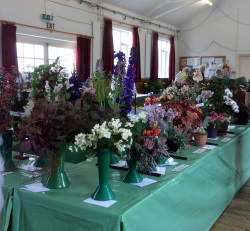 The St. George’s Day breakfast was the most popular yet.  You came from all around, Ramsden Heath, Crays Hill, Wickford, Billericay and even further. 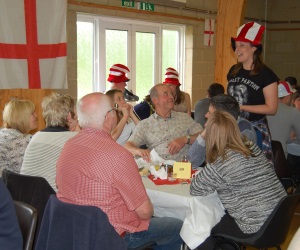 We served 250 people in three hours, 213 full breakfasts and
37 half breakfasts, so please forgive us if there were a few blips.

We all thoroughly enjoyed the day and hope you did too.

We hope to see you all again next year and promise to have better music!

On Saturday evening St. Mary's Church was full to bursting and resounded with the great sound of the
Sid Bolan Big Band.

The evening got off to a great start with Glen Miller's American Patrol and continued with songs from the band's two vocalists, Libby, who gave a great rendition of The Lady is a Tramp and John, singing Beyond the Sea made famous by Bobby Darin. The evening ended with Woodchopper's Ball.

A cheese and wine supper was enjoyed during the interval which was held in the Church grounds.   Thank you to Beryl Clements, Audrey Pegrum and her family for preparing the buffet and to everyone else who helped make the evening such a success, raising £800 in aid of well needed Church funds.

On a very cold and wet morning the Palm Sunday worship commenced at Ramsden Bellhouse Baptist Church with the distribution of palm crosses. 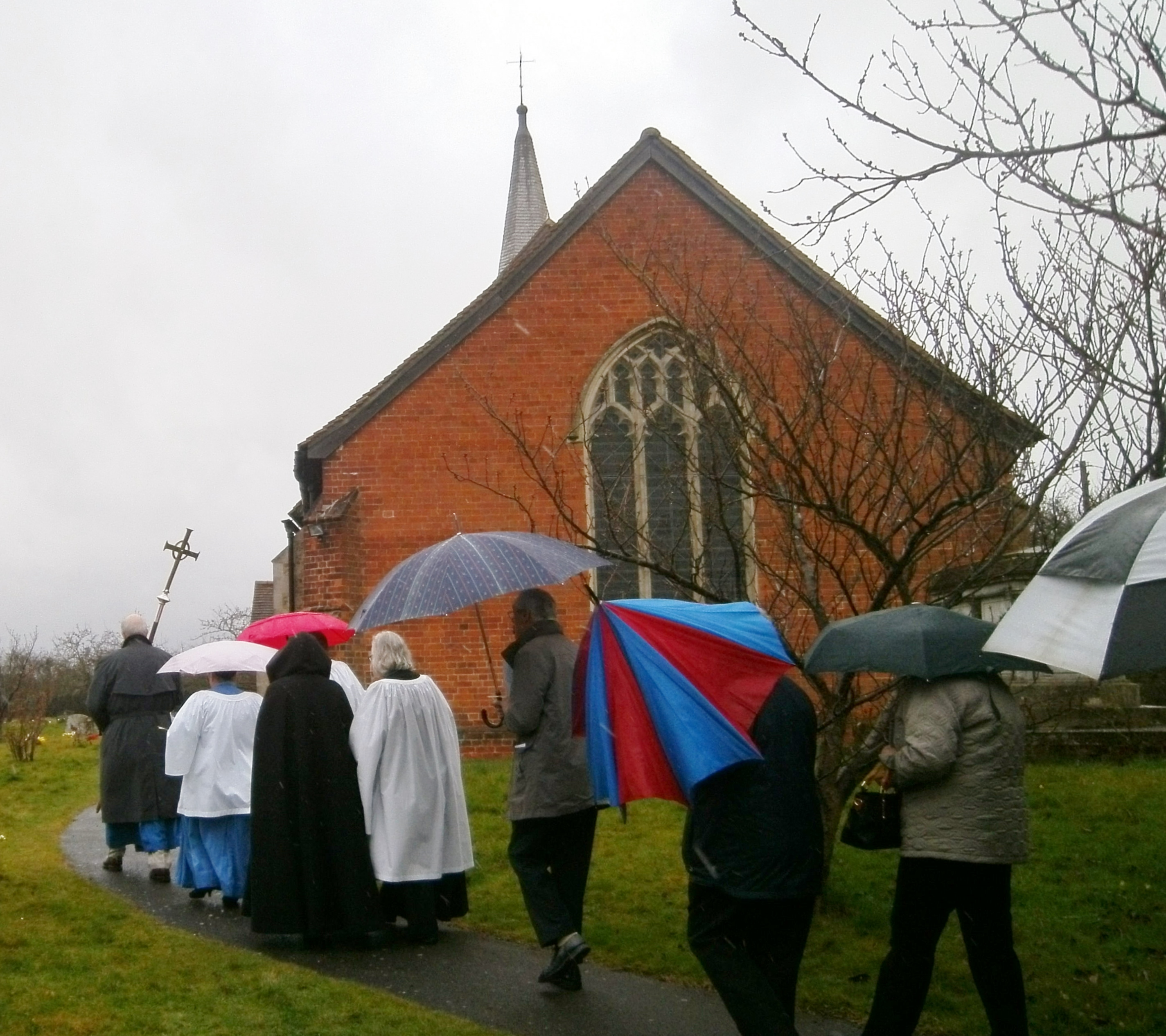 This was followed by a procession of witness in the rain to St. Mary's Church for a combined service of Holy Communion.   The service was taken by the Reverend Miranda Seaman and the sermon given by Jim Hamilton, the Baptist Minister.

Following the service the congregation joined together for refreshments.

A very enjoyable and uplifting, morning, especially when the sun came out briefly and shone brightly through the Church windows.

A very successful evening was enjoyed by over 60 people and £440 raised in aid of St. Mary's Church.  Thanks to our quiz masters, Angela and Steve Tuff, as well as Audrey and Alan Pegrum for the organisation.

The annual Women’s World Day of Prayer service was celebrated at the Baptist Church Ramsden Bellhouse on Friday 6th March.

February 28th and 1st March saw the History of Ramsden once more at the village hall.   It was well attended, though sadly most visitors came from outside the village.   Representatives came from Wickford Community Archives to promote the local history of this area, and Steve Tuff promoted the village website and offered copies of the exhibits at very reasonable prices.

The official opening of the memorial and remembrance garden was carried out on Monday 23rd February
at noon.   In attendance were local council and village hall committee representatives, and members of
the local community. 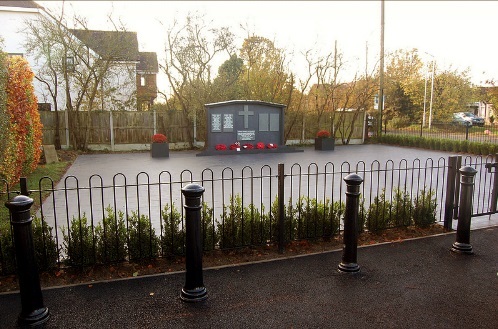 The Village Hall AGM was held on Sunday 25th January 2015 in the New Hall at 3pm.

The Chairman opened the meeting by welcoming those present, apologies were received and last year’s minutes were approved. He opened his report by outlining the last year’s events, thanking all those who helped in their execution, as some of these events require a lot of hard work.

The next subject was the nomination for the next year’s charity. Presentations were made on behalf of two charities, followed by a vote. The vote is restricted to either persons living in Ramsden Bellhouse or those associated with the hall or any club at the hall.

There were two speakers, each supporting one of the following charities:

The selection, by a show of hands, elected ST. LUKE'S HOSPICE as this year’s charity.

This was then followed with the presentation of a cheque for £2,632 to a representative of last year’s charity, ESSEX AIR AMBULANCE.

Next on the list was the election of officers to the hall management committee. All the officers and members of the present committee had agreed to be nominated to sit for another year.

The final section on the agenda was the voting in of the Committee to serve for the coming year.   The names listed below were proposed, seconded and voted in by the meeting.