The ladies of St.Mary's Church, Ramsden Bellhouse took part in the 'Biggest Coffee Morning in the World'
in aid of Macmillan Cancer Support.

The weather was kind enough to allow people to sit outside in the Church garden and enjoy a cup of tea or coffee together with a selection of delicious cakes. Those not eaten were taken along to the Bowls Club in the afternoon and the Beetle Drive on Saturday evening, bringing the total raised to £377.41.

This is Macmillan's biggest fundraising event, where people across the UK are asked to hold a coffee morning and raise money for people living with cancer.  St. Mary's Church were pleased to be a part of it.

Thank you to all those who came and supported this worthwhile cause.
Back to Top

This year's theme was 'The Wonders of Nature' and the display of wonderful flower arrangements in the Church was magnificent.   A big thank you to all. 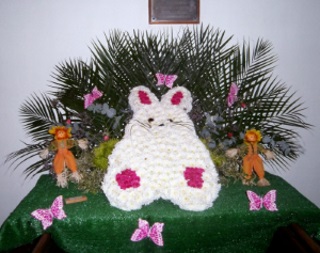 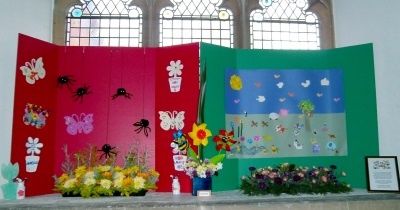 Children from our 'Messy Church' group produced a wonderful arrangement depicting a garden full of flowers and insects. 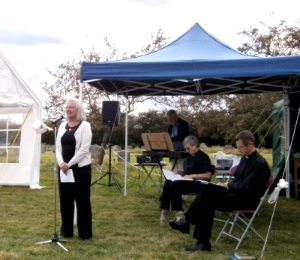 The forecasts for the weekend were dismal, but we were blessed with fine weather on Saturday and Sunday, which allowed us to have our 'Songs of Praise' service outside in the sunshine.
Unfortunately, on Monday the forecast proved correct and it rained all day. However, quite a few intrepid visitors braved the weather and were rewarded with a hot drink and delicious food.

Thank you to all those who came and supported us over the weekend.
Back to Top

On a perfect summer's evening the Church resounded with beautiful singing from a concert given by the Southend Vox Choir.   The theme was 'Songs from the Shows' and included The King & I,Guys & Dolls and many others. The evening ended with a moving version of 'One Day More' from Les Miserables, followed by an upbeat rendition of 'Proud Mary'.

The Church was full with over 80 people attending, raising £653 in aid of well needed Church funds.

A cheese and wine supper was enjoyed during the interval which was held in the Church grounds.   Thank you to Audrey Pegrum and her family for preparing the buffet and to everyone else who helped make the evening such a success. 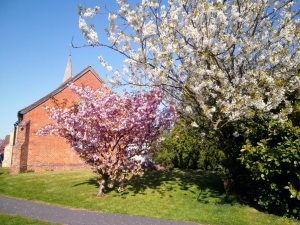 On a beautiful spring morning the Palm Sunday worship commenced at Ramsden Bellhouse Baptist Church with the distribution of palm crosses.   This was due to be followed by a procession of witness to St. Mary's Church for a combined service of Holy Communion but, unfortunately, an electrical breakdown at the Church caused a quick change of plan. 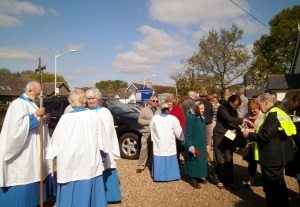 Very quickly cars were organised to collect those already in St. Mary’s Church and brought them to the Baptist Church, along with the Communion elements and, in no time at all, everything was set up and worship began.  The service was taken by the Reverend Stephenson Robertson and the sermon given by Jim Hamilton, the Baptist Minister.

Following the service the congregation joined together for refreshments.  This was a very unexpected, but enjoyable and uplifting, morning. 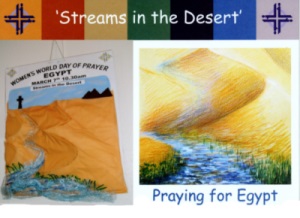 On the 7th March the annual Women’s World Day of Prayer service was held at the Baptist Church Ramsden Bellhouse and was attended by 39 people. 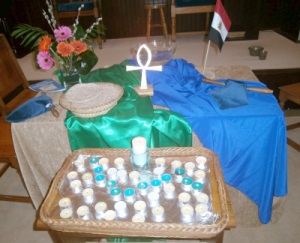 The theme of the service this year was ‘Streams in the Desert’ prepared by the women of Egypt.  The booklet tells us that although Muslim is the main religion, some 12% of Egyptians are Christians. Before and after the service a slideshow of the work being done for the women of Egypt was shown.

Our speaker was Pauline Hamilton, wife of the Baptist Pastor.

Following the service a time of fellowship was enjoyed with food prepared by the ladies and a very interesting display of pictures, cards and other related items. 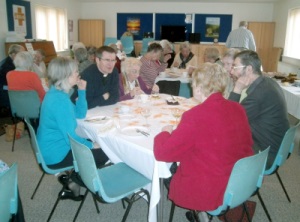 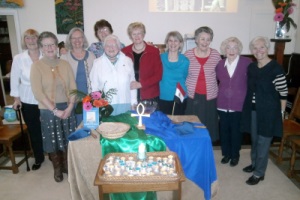 You may be wondering what is WWDP? On the first Friday in March every year over 3 million people worldwide pray and worship together during this annual day of prayer, with a service prepared each year by the women of a different country. This is always an exciting day as a great wave of prayer sweeps the world, beginning when the first service is held in Tonga and continuing around the world until the final service takes place some 35 hours later in neighbouring Western Samoa. By then the service will have been celebrated in over 170 countries and more than 6000 services will have been held in the British Isles alone. If you would like to know more about WWDP do get in touch with any member of our local churches. If you would like to know more about WWDP go to their website: www.wwdp.org.uk