The purchase of two new bowls mats created a stir of excitement! Overheard were comments such as "my woods play differently"   "my woods have never shot across the mat like that before!"  "more weight, or less weight required now!"   Some adjustments required it would seem.

However, we are managing. Some better than others. Our newest members are coping with bowling very well, shaping up nicely and showing great promise .... future bowling stars?

Arranged friendly matches have been played during the summer months prior to league team matches commencing again this autumn. Good luck, Rooks Ravens and Robins as you climb the league tables! Congratulations to the winners of our annual Bowls Competition (see 2014 Bowls Championship report below).

The winners were: Singles – Tom Dines.  Doubles – Rita Smith and Eileen Smith. Thank you Roy for organising the events.

Our Charity event, 'Tea in the Garden' was well supported by members and friends. The weather was pleasant enough to enable members to amble about the beautiful garden and try their luck with the games dotted about. More than generous amounts of tempting, tasty sandwiches, quiches, cakes and desserts were offered as refreshments. Many thanks to Angela and Rusi for the use of your garden. A most delightful, enjoyable afternoon.

The Summer Fete, with stalls and arranged activities, was held at the Village Hall. For members who attended and helped organise our Bottle Tombola plus the raffle, a grateful thank you. Much appreciated.

Christmas Lunch
Our Christmas Lunch was held in the Village Hall, and members opted for an outside caterer and we were not in any way disappointed as the entire event was most enjoyable.  Members were waited on and served scrumptious dishes to dine on, it was excellent!  Positive feedback from bowlers and guests alike. Now looking forward to a repeat performance!

Christmas Bazaar
Home baked cakes, pickles and jams were present on the Bowls Stall, along with a superb raffle.
Thank you to those members who organised and manned the stalls on the afternoon in support of
the Village Hall.

A social evening for the League Teams, an opportunity for the teams to intermingle and play against one another, proved to be an enjoyable evening. 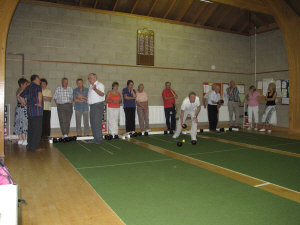 The "Coaching Evening" event was appreciated by those who attended. Positive advice was offered to improve bowling skills
– so now, go practice!

Thanks to Malcolm for arranging the above events. 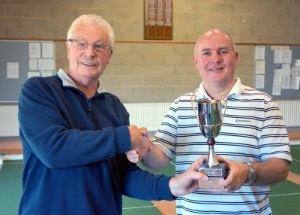 This year the Singles competition was held on Sunday
13th April 2014.  There were 15 members participating and we all had a very enjoyable day.   The winner was
Tom Dines with Roy Richards as runner up. 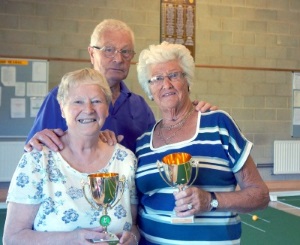 Our next competition was the Doubles which took place in the Village Hall on Sunday 18th May 2014.   Twenty eight members took part and the eventual winners were Eileen and Rita Smith with Alison Hare and Chris Lewell as runners up.
Back to Top

One of our Founder Members, Mr Bert Edwards, has had to retire from the Bowls Club. 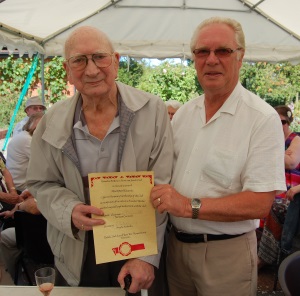 He is now into his nineties and unfortunately has trouble with his eyes, so it is with regret he has had to make this decision. He will be missed by everybody at the club.

It was decided at a Committee Meeting to make him an Honorary Member and at our Bowls Charity day for the Village Hall charity, which this year is The Essex Air Ambulance, we presented Bert with his certificate. Rusi & Angela Hodivala opened up their garden for the event and the afternoon was well supported, raising £391.

Bert is very well known within the village, and is admired for all the quizzes and poems he has produced over the years for the Horticultural Society and the Village Magazine.

Good luck in the future from all your Club Members