Successful competitions again this year and we all enjoyed the day’s events. 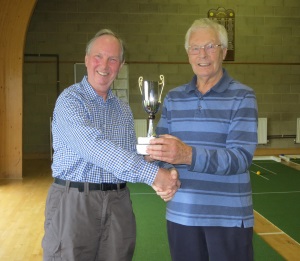 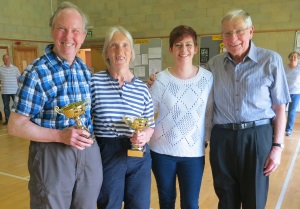 Our friendly club continues to have enjoyable roll up sessions on Monday nights, Wednesdy mornings and Friday afternoons. It's difficult to remember now just how cold it was without the heating - many layers were worn and visitors for matches warned!

Our league season is now nearing the end. The Ravens and Robins are near the top of Division 6 and 7 and the Rooks are hoping to stay in Division 2 following promotion last year.  As well as club nights and league matches we have had a few friendly matches.

Many of our members and friends enjoyed a quiz in the Autumn, thanks to Stuart for arranging and being question master. I think some of the younger teams struggled with questions aimed at us older teams!

In November Kay, Emily and Peter, after narrowly beating our other Ramsden team amongst others in the Bowls Round Robin stage, won through to the knock-out stages and beat three other clubs to win a triples competition at East Hanningfield.

Our Christmas Dinner, followed by fun bowls, was very good.  We had been worried as we had to change caterers at fairly short notice, but the food was excellent.  Presentations were made and Peter had swept the board in all, along with Roy for the Friday afternoon couples and Kay in the pairs. Thanks to Barry and Jane for arranging everything. They did it so well, they have the job for the next one!

As usual our cake stall proved very popular at the Bazaar. Thanks to Isabel and her fellow cake makers, and all those who helped on the day. The Bazaar turned out to be a bit unusual, having a power cut, but fortunately was soon put right.

Cakes are very popular at bowls and most of our members bring cakes to celebrate birthdays.  Special birthdays and Anniversaries are noted with a presentation.  Roy and his wife Audrey celebrate their Diamond on 23rd March. We are glad to have Tom Shepard fit and well and back bowling with us after having a pacemaker fitted.