Many thanks to all who supported Bert’s Quiz. This one has produced a record number of responses.   There is an outright winner, although several were just a point behind the winners.

Jacqui & Terry Manning are the winners of the £20, with 43 correct answers.

Bert is not is such good health at present, but we hope that he can produce another of his quizzes for the summer. Fingers crossed!

The Society's AGM took place on Monday 17th November in the Village Hall, followed by presentation of this year's trophies.

Click here to read the AGM Report and Prize Winners for 2014.

The talk on 25th October in the Village Hall was unique!   Isabel Johnson, as the Village archivist, had set the mood for the evening with a moving display of memorabilia from the two Wars showing the effects at a local, Village level.

David, now 90 years old, gave his audience a fascinating, fluid talk of his personal experiences in the Sherwood Rangers Tank Corps, as a ‘boy’ of 19 years. The Hall was full and completely captivated by his personal stories, making light of the dangers but not glorifying his experiences or dwelling on (what must have been) many personal losses.

A brilliant talk, by an exceptional man and an occasion I and others felt privileged to be part of.

Angela Hodivala
Click here for a full report on the evening.
Back to Top

The Food Fayre took place on Saturday 18th October in the Village Hall. The food ranged from delicious soups to pies and many other autumnal dishes. 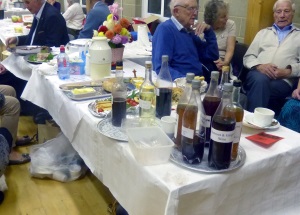 Canvey and Galleywood had two tables each, laden with goodies.  Galleywood had lots of bottles of home made wine and their speciality this year was a ham hock done like a brawn with a home made loaf of bread.

There were a few varieties of soup in large tureens and several war recipes, including beef broth and an enormous Woolton pie made with vegetables (by Angela Hodivala) - absolutely amazing. Click here to get the recipe for Angela's Lord Woolton Pie.

Everyone who came said how enjoyable the evening was, all the more so as it was totally without charge.

Praise must go to all the local horticultural groups who put on the evening, coordinated by Tony Rogers, Chairman of the InterSociety Horticultural Group.

Our Autumn Flower & Produce Show took place on Saturday 13th September. There were exactly 185 entries, compared with last year's number of 125, which is very encouraging. 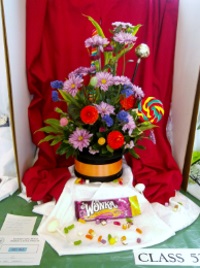 Like all our activities, we do them to enhance a community spirit. 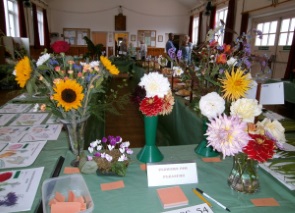 There are no entry fees and no cash prizes. We are always trying to encourage novices and the enthusiasts alike.

It turned out to be a very pleasant morning and afternoon with some new participants also.

There were flowers, vegetables, floral arrangements, cakes, scones and jams and handicrafts. The show was open to the public from 1.30 pm to 3.15 pm.

We will be selling the home grown produce at future shows, so do come as an exhibitor or a visitor to our next show. 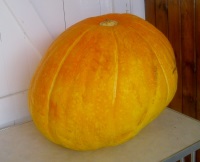 Our pumpkin couldn't match the Westminster Hall one of 1,367 lbs!!! but,
nevertheless, weighed a mammoth 112lbs 12oz.
Our winner of the 'guess the weight' competition was Derek Jackson.

Our Autumn Flower & Produce Show is an open show, so non-members can enter.
Entries must be in by 10.30am on the day. The hall is open from 9am, but has to be cleared by 11am for the judging.

Details of the schedule are displayed on the Horticulture Notice Boards in the Village Hall. There is no entry fee and, in turn, there are no monetary prizes but, of course, judging will place the exhibits appropriately.

Viewing by the public is from 1.30pm to 3pm when the list of winners will be announced.

We are not expecting to get entries like this one exhibited at Westminster Hall last autumn!! The largest pumpkin weighed in at 1,367 lbs!!!